Compared to mobile applications, developing enterprise software and online applications has various difficulties. Businesses throughout the globe and sectors are continuously under immense pressure to create their corporate apps in the best way since people need ultrafast applications like PayPal, Netflix, and many more.

Applications that take longer than a few seconds to load risk losing a lot of prospective users and target audiences. As a consequence, it’s critical to pick the best mobile app development firm and tools, like NodeJS, for creating robust, effective apps for businesses. NodeJS is the most suggested technology to move on with the idea of developing your own corporate software or application. Let’s quickly review NodeJS before we continue our discussion.

Because of the simplicity and convenience of the development process needed to create apps of all sorts and sizes, NodeJS, a cross-platform, run-time programming environment, has become quite popular among enterprises seeking web application development as well as corporate mobility solutions.

JavaScript (JS) code may be written and run outside of a browser thanks to NodeJS. Because it uses an event-driven input-output mechanism that is asynchronous and non-blocking, it is also incredibly lightweight. The client side and server side of the web app may now communicate with each other in both directions as a consequence. 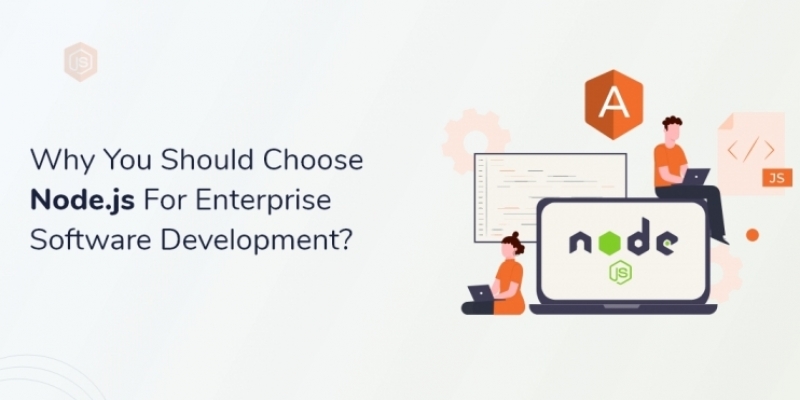 What Are the Key Advantages of Node Js?

If you’re still not sure why you should only use NodeJS for creating corporate software or online applications, let me persuade you by saying that NodeJS offers the best foundation for creating and maintaining an app. It is easy to code and execute, cross-platform, and scalable. The most popular platform for creating real-time apps, microservices, and IoT (Internet of Things) solutions is NodeJS, which has been downloaded by billions of people. Today, NodeJS is the technology that is growing the fastest, and it is one of the top five most sought-after developer talents.

For your fast reference, the following is a discussion of the main benefits that NodeJS offers:

For the common micro-services that businesses use today, NodeJS works well.

What makes NodeJS so popular among businesses looking for Node Js development services?

Over the past ten years, NodeJS’s growth and popularity have accelerated at a never-before-seen rate. There are now more devs working on it. Furthermore, NodeJS has become the most prized and sought-after technology among companies and developers trying to create corporate software and applications. NodeJS is very well-liked by companies and enterprise software & application developers worldwide.

What accounts for NodeJS’ enormous appeal to both corporations and developers? Let’s take a brief look at some incredible NodeJS features.

Enterprise apps need to be scalable since a company’s needs may alter as it grows in the future. improving speed using the NodeJS runtime for Google Chrome V8. NodeJS is developed in C++ and allows developers to create code for several operating systems (operating systems).

For major businesses, the V8 engine is highly popular for enhancing app performance and speed. As it utilizes the most recent security patches, performance upgrades, and routine updates, it is loaded with the newest JS features.

NodeJS performs input-output activities via event lockup and callbacks since it is single-threaded. The distinctive design of Node.js aids developers in handling several connections at once. Because NodeJS can effectively manage a variety of connection requests, it is a great choice for developing corporate applications.

A team of app developers and other staff members who work on various stages of the development process is known as a cross-functional team. It is an important part of the agile process and is necessary for getting different perspectives on how the project is coming along. This level of close collaboration produces solutions and apps for businesses that are very original, superior, and effective.

One of the few JS frameworks utilized for both the front end and the back end is NodeJS. Thus, your team of NodeJS engineers at a NodeJS development firm may work on both the front-end and the back-and sides without having to learn a new programming language or piece of software.

We may thus draw the conclusion that when you utilize NodeJS for corporate application development, you can provide each area of app development – client-side and server-side – the attention it deserves. This gradually lowers the work needed to update the app in the future.

One of the main components of NodeJS is the Node Package Manager (NPM). It enables the installation, usage, and updating of open-source software modules by developers. You may simply avoid adding extra layers of complexity to your corporate application development by not having to create or code any common functionality.

Local dependencies for corporate apps are simple to handle thanks to Node.js. In handling these tool dependencies for projects as well as for tools that are deployed globally, NPM is really helpful. Lock.json, a package provided by NPM, lists project dependencies. As a result, you may instantly start using a variety of independent tools. You can write the dependencies and maintain different versions of your app’s code with the least amount of human work by using NPM.

Enterprise apps work best with NodeJS. Employing open-source modules raises a lot of privacy and security issues for businesses. To solve these problems, Node.js created the NPM corporate edition. Businesses that handle sensitive data have different methods of keeping their data on the cloud. These enterprises may host NPM infrastructure directly behind their (corporate) firewall thanks to the NPM enterprise edition. Therefore, with the aid of NPM and NodeJS, businesses of all shapes and sizes can simply regulate code access, update dangerous or risky code, and uncover security flaws.

NodeJS is ideal for corporate apps due to its capacity to enable app updates. The following are some of the most frequent problems that businesses run into when updating their enterprise software.

Small MVP (Minimum Viable Product) releases are how the majority of businesses start their ventures. The project expands over time, gradually adding additional features and users. Your development team can be dealing with several development difficulties before you become aware of them.

To ensure that your app doesn’t crash and performs as intended as the amount of app users grows, you will need to increase processing capacity. Ideally, you must scale the program’s most commonly used area. According to the developers, the remaining components should see just moderately heavy traffic. Monolithic applications cannot be employed with this technique since you will eventually need to enlarge the entire system. Program deployment becomes a nuisance for developers when the app becomes unmanageable and challenging to maintain.

Additionally, the team becomes too big for effective coordination. Scaling corporate apps is now hassle-free, stress-free, and simple thanks to Node Js microservices. Developers are able to leverage the micro-services architecture thanks to NodeJS.

A microservice is a solitary, autonomous unit that can function without the assistance of other units. Because the developers may work on all these micro-units individually, it is easier for several teams using various programming languages to collaborate and work on the same project.

Microservices can increase productivity and lower costs: NodeJS enables developers to manage independent internal and/or external teams from anywhere in the world. This function enhances project efficiency while lowering expenses. The fundamental reason is that smaller, more dispersed teams are generally simpler to work with and manage. Every time you would really like to make a simple modification to the program, you don’t have to use the entire source. As your company grows, you might need to deal with a variety of issues to prevent failures. You may easily handle the minute details of your web development activities with NodeJS’ microservice architecture.

Microservices patterns may be used to manage a variety of micro-tasks, including email campaigns, reporting, deployment, and CMS. This is the rationale for the adoption of micro-services in corporate applications by companies like GoDaddy, Netflix, and PayPal.

You can use NodeJS to build cross-platform applications on a variety of platforms. So, if necessary, you may utilize portions of your web application’s code on Windows, Linux, and Mac OS. With NodeJS, you can utilize the same team to develop both desktop and online applications. Additionally, you are not required to employ Objective C or C# developers. You should hire Indian programmers for your corporate application development project if you want to create a mobile version of your business application and the majority of your target audiences use iPhones.

The same tools available to front-end developers are also available to NodeJS developers, and NodeJS enables them to inspect and analyze client-side applications as well as back-end and desktop applications. As a consequence, NodeJS programmers need not need a Windows or Mac machine to write code for Windows or Mac OS programs, respectively. With NodeJS cross-platform development, it is often simple to share code across many platforms, which greatly lowers the cost of developing corporate apps.

Those who create NodeJS corporate apps profit greatly from caching single modules, as do all app developers. When a request is made, NodeJS automatically creates a cache of the first module in the app’s memory. Web pages can load quickly since NodeJS has caching capabilities. This is so that the program does not have to keep running the same code over and over again.

In addition, NodeJS caching facilitates user navigation, which improves the user experience by speeding up response time. Additionally, quick reaction times benefit the app’s SEO rankings. So from an SEO perspective, NodeJS is a fantastic option for corporate application development.

One of the main benefits of NodeJS is its simplicity and speed of learning. NodeJS relieves developers of the needless effort of learning syntax and processes because it is a JS-based language. Learning, creating, coding, and deploying a variety of scalable NodeJS apps is simple for programmers and developers. NodeJS makes it incredibly simple for developers to code on Windows and Unix platforms. A mobile app development company’s novices will tell you how simple it is to learn NodeJS. The process of developing apps is directly impacted by the simplicity of learning and ongoing assistance.

Significantly less time is spent on development, and it is quite simple to find and employ Nodejs development service providers at the most affordable prices. As a result, fundamental development has relatively cheap expenses. Furthermore, long-term support is a crucial factor that should be taken into account for an enterprise-level program. Nobody wants to continually jump between platforms and technologies.

NodeJS offers developers long-term support, enabling them to organize their business around a particular technology and removing the challenges of switching between platforms frequently.

To sum up, I hope that with this complete guide, now you know everything about the advantages of choosing Node.js for your enterprise concerned about your software development.

Furthermore, if you’re seeking assistance for your enterprise in developing your software, you should hire Node.js developers in India.

5 Ways to Work Smarter With Your Data

How Robotics & AI Go Together

5 Must-Have Windows Apps and Software for Any New PC

How to Create a Budget for a Startup Business in 2022