I was at a conference this past week, and one of the speakers told the story of how he had decided to switch from iPhone App Development to Android. He talked about all the benefits that an Android app could offer but then admitted some disadvantages.

Well, this got me thinking about all of the pros and cons of Android App development that I have experienced over the last year. Here are some of my thoughts that may help you decide if it is time for your business to create an app for Android.

But before I start, I want to be clear that my company (PixelCrayons) does both types of App Development. I am not trying to push you one way or the other. But rather, I hope that these experiences with Android App Development will help you in your own research and evaluation process.

Let’s jump right into it:

15 Pros and Cons of Android App Development for Business

PRO #1: There is a much larger market for Android apps

In my opinion, this is probably the biggest pro of developing an app for Android. 25% to 40% of smartphone users in North America use an Android device in any given month. While both platforms have many users, you will see a vast difference when you compare the number of users who have activated their iPhone App vs. Android.

As of the first quarter of 2021, Android users had a choice of 3.48 million apps, making Google Play the app store with the most available apps. With approximately 2.22 million iOS apps available, the Apple App Store was the second-largest app store.

Android has more than twice the number of monthly activations as iOS devices. That is why we started developing Android apps first and continue to do so for this very reason. Moreover, the demand for Android app development in India is actually increasing.

PRO #2: Android apps are more affordable for your business

Another benefit that I have found is that Android Apps are generally cheaper to develop. This is because Google provides a lot of free tools that you can utilise. This includes the Android Developer Console, where you can test your App with many different devices before publishing it in the Play Store.

Android apps are also less expensive for users because they have many options to choose from when looking for an app, so they do not have to pay as much for a quality app.

According to the top web development company research, roughly two-thirds of small businesses that developed a mobile app for less than $30,000 (63 percent) developed exclusively for Android operating systems, compared to only 41 percent of companies that developed an iOS app for the same price.

PRO #3: Google Security – Apps are less likely to be hacked

One of the main security concerns that I hear from business owners is whether or not their app will get hacked if they make it available on Google Play. This is because there have been many high-profile hacks where apps have been infected with malware.

Google has improved security in the past couple of years. Still, apps on Apple’s store are usually more secure due to their strict guidelines and high cost for app developer registration.

I have found that the percentage of Android Apps that get hacked is less than one percent. This may not be much comfort if your app gets hacked, but I think it is worth moving forward with Android Development when looking at the stats.

PRO #4: Developers are more affordable for you

As I mentioned earlier, there are a lot of free tools available to developers working on an Android App. This means that most developers can use these tools without having to pay for them initially.

It means that the cost of development will be much lower than an iPhone app. It can be four or five times cheaper to get an Android App up and running in many cases.

I have noticed that Android users are more open to using Apps for business purposes. Moreover, some of the most popular apps on the Android platform are small business applications, such as those used by real estate agents or home service providers like electricians.

Many businesses feel more comfortable creating an app because they can customise it with any colour, font, logo, or image they choose. This is not usually possible with an iPhone app because of the guidelines put in place by Apple.

Using a third-party app is one way to cut development costs. Many apps are available for free or at a low cost on the Android platform. These can be used as part of your app rather than creating everything from scratch. This is also possible with an iPhone app, but it usually requires paying monthly fees to access the app.

The services available for Android Apps are usually very affordable, so this will help you save money when building your App.

PRO #7: Simple to use and fast for users

Another positive thing about Android Apps is that they are relatively simple to use. I have noticed that the average user spends less time navigating an Android app, and they tend to be easier to use in general.

This is another reason businesses find it more appealing to develop an Android app as their first choice. They want their potential customers to access the information they provide on their site easily, and an Android App helps them do just that.

In addition, you can have more than one page of content within a single screen on Android devices. Besides, users are very familiar with this feature because it is the primary way they navigate through their phones.

A significant advantage of developing an Android app is that you can build it to support a wide variety of devices. The screen sizes are not as restricted as those with the iPhone, which allows you to build one app that will work on a range of devices.

The number of available Android devices is staggering. Still, even with this level of competition, Google has managed to keep its operating system free from fragmentation issues for the most part. This means that your Android App should be compatible with most devices that are made by any manufacturer.

As I mentioned earlier, the Android platform is home to many free software tools that can be used to develop your applications. These can help you to create a functional app for your business without any upfront cost.

Because the open-source movement has grown by leaps and bounds over the past few years, many libraries and other resources are available for developers working on an Android App. These tools can be used to reduce development times and also keep costs down as well.

One example of open-source libraries is the Android Support Library. Various features are not standard with Android, such as app bar and action bar support or navigation drawer support. These tools allow you to include these functions in your apps without having to code them yourself.

The Android platform has several advantages in the mobile app development world, and one of them is Google’s excellent support. The customer service team at Google will help you with any issues that arise through the Google play store or when your users access your App.

Because many people develop applications for business use on their phones, they need help when something goes wrong. By using Google’s support services, you can get through any issues when dealing with your users. 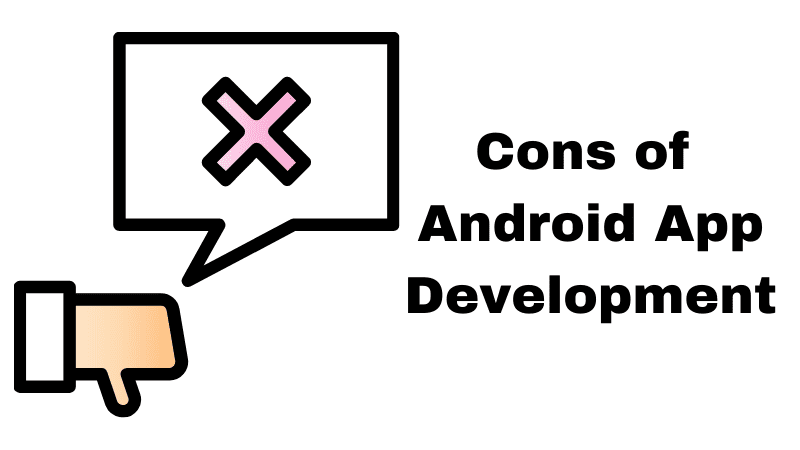 The biggest drawback of developing an Android app is the fragmentation issue.

Although it has come a long way since its release, fragmentation is still a significant concern for users and developers. Because so many devices are available to choose from, you will need to build separate apps for each platform if your business wants to reach broad audiences.

This problem is not unique to Android; iOS users face this issue when encountering fragmentation among iPhone models. There are, however, some methods for reducing the effects of fragmentation on your app while still expanding it to different devices.

In addition to the fragmentation issue, Android is constantly in the news for its many security issues. Because it is an open-source platform, Android has been a target for attackers from the beginning.

Because of this, security issues have been a big problem on the Android platform since its initial release. In fact, several studies have found that most mobile malware occurs on Android devices.

Google does an excellent job of protecting users from malicious apps by screening the apps published through the Google play store. However, any development version of your software should still go through numerous rounds of security testing before being released to the public.

As with all things related to Android, the interface of your application is up to you. Android applications do not have universal standards, so you’ll have to experiment with different layouts until you find one that works for you.

While this freedom does allow many developers to create beautiful apps, it can also be a pain if you have no experience with interface design. However, several tools and resources are available to help you build a beautiful app that gets the job done for your business.

There is a wide array of Android devices available. Because of this, there are also many types of interfaces and settings that you can use when building your app. Moreover, this can be both a blessing and a curse for mobile app developers.

While the variety in devices allows adopters to choose whatever phone they want and still use your application, it can also cause problems when developing for different devices. It is essential to thoroughly test your app on as many devices as possible before releasing it to the public.

CON #5: Copyright issues are more of a concern

Since Android is open source, many people are unsure about how to protect their apps at all. You must remember that the Google play store is the only place to publish your app; outside of this store, it is never safe to assume anyone will give you credit for your work.

Google offers a highly comprehensive guide to app protection, so you should take the time to familiarize yourself with these guidelines if you are planning to publish your App.

As you can see, many issues must be taken into consideration when developing an Android app. However, the platform is continually expanding and becoming more secure with each update.

If you take your time and follow Google’s guidelines for publishing, most of the problems you will encounter when dealing with Android users can be worked out. If you have a good marketing plan, there is no reason that your business cannot be successful on Android.

Moreover, you can hire Android developers India that will build your app for you.

I hope the above information is helpful. Good luck!

Q1:What are the advantages and disadvantages of app development?

A1: Here are the advantages and disadvantages of app development:

Q2: What are the best platforms for Android app development?

A2: Some of the best IDE’s for Android App Development are:

Q3: What are the procedures involved in creating an app?

A3: The sequence of events involved in creating a mobile app includes:

The author Dennis P. Reed possesses a vast experience in the IT industry, especially in the domains of website and mobile app development and digital marketing. He writes on topics encompassing the above mentioned domains and is considered a maven in his chosen field – Information Technology.