Today, linear regression is used in many fields, especially by data scientists in various observations. The basic concept of regression is to observe two major things.

Is predicting a dependent (outcome) variable by a set of predictor variables satisfactory? 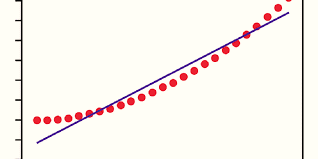 Prediction of values within a continuous range is possible with this.

The very first step to mastering machine learning is by educating yourself about linear regression. You are required to be confident with basic equations and mathematics.

The linear regression simple equation is given as: Y= m*x + b where,

What are the major uses of regression analysis?

III. Prediction of future values and trends is possible because of regression analysis.

Point estimates are obtained by regression. “Price of gold in the future” is a typical question.

What are the steps to follow for solving the regression model?

If you take any Linear regression model and observe it, you will find many dots scattered on the image. What are those dots? The dots are nothing but your precious data. There is also a center line between the dots. This is nothing but the best fit line. The best fit line can be drawn with our own prediction using our data set. This will have the least error.

You will get your best fit line by following the above two steps. New values can be predicted easily by using the best fit line.

Linear regression is classified into two types, which are:

In simple linear regression, we try to establish a relationship between input, a single independent variable, and an output, a corresponding dependent variable. This can be shown in the form of a straight line.

The line equation is given by:

Where Y is the dependent variable or output

The error term is ε.

There is only one predictor variable in simple linear regression.

The equation given below shows the relationship between predicted values (y) and independent variables (p). This is known as multiple linear regression.

Areas where multiple linear regression can help us:

(i) Fit many models

You must aim to build simple models. Your model necessarily doesn’t mean it’s great just because you have used many independent variables. Using different combinations of variables, try to build multiple regression models. By doing so, you can get a good model.

By exploratory analysis, you can get a good model. It is an absolute must to understand the relationship between the independent and dependent variables and whether they possess a linear trend. After that, you can use them in your model to obtain a good output. Outliers or extreme values should be checked and treated. The extreme values can skew your predicted estimate values if they are left unchecked.

(iii) Relevant variables to be graphed

Always ensure that you focus on simple plots that help in understanding the model. To judge your model, you will require some simple factors. Those factors are R square, adjusted R square, p-value, and coefficient values.

Transforming every variable in sight should be your goal. Transform logarithms of all positive variables. Based on the potential range of data, standardizing should be done. By doing so, coefficients can be directly interpreted and scaled. Before multilevel modeling, transformation should be done.

Coefficients do not necessarily have to vary by group. Permit coefficients to vary in the model. If the estimated variation scale is a bit too small, you can ignore it if that is more convenient.

How Artificial Intelligence and Technology are Revolutionizing Firefighting?

5 Tips to Attract More Customers to Your Diamond Business

Cardano vs Shiba Inu: What You Need to Know Before The Year-End

Why Space is The Next Frontier for Cybersecurity